At the end of the 19th century, a movement emerged that perfectly combined these materials. Be captivated by modernism in Brussels with Art Noveau Guided Tour. 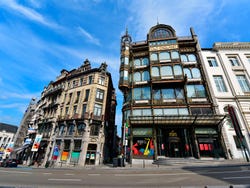 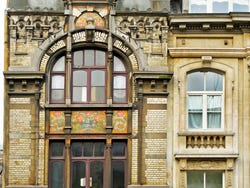 At 10 am we'll meet at the Grand Place in Brussels to start our Art Nouveau route through the streets of the Belgian capital.

Our first stop will be in front of the avant-garde facade of the Musical Instruments Museum. The building housed the Old England department store in the 19th century. From here we'll take a tram to Bailli, the district with the highest concentration of modernist buildings in Brussels.

Large windows will attract our attention soon after we get off the tram. This is the Tassel Residence, which has been declared a UNESCO World Heritage Site. This house designed by the Belgian architect Victor Horta was the first Art Nouveau building in the world.

We'll continue to admire other avant-garde examples of the neighbourhood and stop in front of the Residence of Paul Hankar, the Belgian Art Nouveau architect. We'll appreciate his modernist imprint on the elegant balconies of the Ciamberlani Hotel.

The tour will end at 1 pm in front of the Horta Museum, which you're free to visit.

All of our providers comply with local legislation and applicable health recommendations to avoid the spread of Covid-19.

The activity takes place with a guide that speaks in english.

You can book up until 10 hours before the activity as long as there are still places. Book now to guarantee your spot.

Electronic. Show the voucher on your phone.

Wheelchair accessible. This must be indicated in the reservation.

All services published on Civitatis are carried out in accordance with our Sustainability Code. Specifically, this activity applies the following practices: Show more

No printing of documentation required.

If you have any other questions please contact us.

These are genuine reviews written by our customers.

I travelled by myself
10

I travelled with teenagers
10

I travelled with teenagers
10

I travelled with my partner
10

I travelled with teenagers
Show all the reviews
like

9.10 / 10 13 reviews
Set off on a day trip to Luxembourg, one of the less-known cities of Europe and on your way back to Brussels stopping at Les Ardennes and the city of Dinant.
US$ 76.70
Book
like

9.50 / 10 6,220 reviews
Ghent and Bruges are two of the best preserved medieval cities in Europe and two of the most-visited towns in Belgium. Take a full day trip.
US$ 52.30
Book
like