In some respects, Ghent’s history is similar to Bruges's. However, Ghent never fell into decline, as it was able to adapt its economy to the times. During the nineteenth century, its textile industry became renowned worldwide and it established its own university, which attracted many national and international students to the city, thus keeping the city alive. Today, Ghent has a population of nearly 250.000, of which 45.000 are students, which makes it one of the liveliest cities in Europe.

The town was founded during the ninth century when Baldwin I (also known as Baldwin Iron Arm) established a fortress to protect the two abbeys of Ghent: St Peter’s and St Bavo’s from the Vikings. Ghent, like Bruges, has an interesting network of canals and a stunning medieval city center, and if you were to ask, most Belgians would say they prefer Ghent to Bruges.

In the 80s, Ghent was completely restored to attract tourists like its neighboring Bruges had done previously. The buildings were cleaned, the canals were purified and the industrial areas were repaired.

Things to see and do in Ghent

Ghent is larger than Bruges and, although there are numerous signposts throughout the city, we recommend reading up on what there is to see before getting to Ghent:

How to get to Ghent?

These are the best options to get to Ghent:

Guided tour: We highly recommend this option. For just € 37 (US$ 40.70) you'll be driven to Ghent in a minibus, you'll do a guided tour of the city with an English-speaking guide and you’ll have four hours to visit the city by yourself. If you would like to book an organized day trip to Ghent, click here. If you would like to visit Ghent and Bruges on the same day, we also offer this guided tour.

Train: This is the fastest and easiest option for those who prefer to see Ghent of their own accord. From Brussels, the train costs € 9 (US$ 9.90) per journey and it takes approximately 35 minutes. 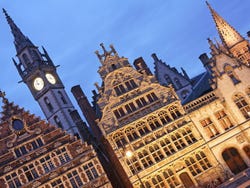 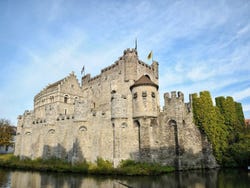 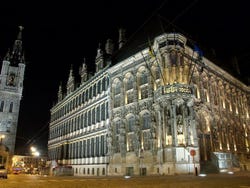 Town hall and the Belfry of Ghent
3See photo gallery

53 kilometres to the northeast of Brussels. 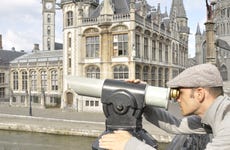 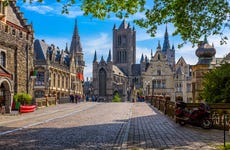