Located under the Place Royal (Royal Square) are the remains of the buried and ruined former Palace of Coudenberg, the ancient seat of government of the area of the Duchy of Brabant.  To visit the remains if the old Palace, you need to go through the Belvue Museum.

The former Palace of Brussels was founded between the eleventh and twelfth century on the small hill of Coudenberg.  Over the years, the Palace was extended and converted into a residential palace. Several families lived in the royal residence, such as the Duke of Brabant, the Duke of Burgundy, the Archdukes Albert and Isabella and the emperor Charles V.

The building quickly became a symbol of the power of the royal family dazzling those that visited the Palace with its beautiful gardens and works of art, until, in 1731, a fire burnt down the Palace and all the area around it.

Forty years after the fire, the ruins of the Palace were demolished and buried under the new construction of the new Royal Palace of Brussels.

If the walls of the former Palace could talk, they could tell stories about the royalty that inhabited in its rooms and the period in which they lived. During your visit to the heart of the Palace of Coudenberg, you’ll visit several rooms where little is left standing, but it’s the memories and the past of this former Palace that are truly precious.

From a visual point of view, the visit does not offer much and you might be a little disappointed to see so little. However, the history is truly fascinating.

Exploring the Palace of Coudenberg 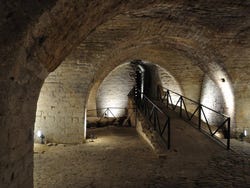 Under the Place Royale.