Despite being one of the most modern metros in Europe (the first opened in the seventies), Brussels Metro is very limited and gives the impression that it is old and a little unclean; although this doesn't mean that it isn't efficient. The range of some of the lines is insufficient and you will find that you will need to change means of transport regularly to get to your destination. 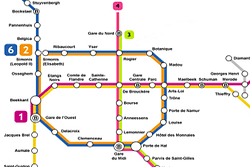 Brussels Metro is made up of six lines, four of which are conventional and two are premetro lines (premetro are underground tramways).

In the city center two of the metro lines merge into one, this means that there are essentially only three metro lines in most parts of Brussels, which in our opinion is insufficient.

The “Métro de Bruxelles” opens during the weekdays at 5:30 am and closes at midnight. On Saturday, Sunday and public holidays, the metro runs from 6 am – 12 pm. Some lines like 3 and 4 run from 5 am onwards.

The frequency of the Brussels Metro depends on the time of day and the day of the week, for example, a metro runs every 6 to 10 minutes during the peak hours. After peak hours, the metro runs every 20 minutes. Keep in mind that in the city center two metro lines run on the same track so you will rarely have to wait 20 minutes for a metro.

You can check the timetable of a specific metro line on the STIB website:

If you’d like to find out more about the various travel cards and single-journey tickets available in Brussels, click here: Price of public transport in Brussels 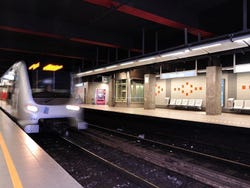