Brussels Airport (BRU) is located in Zaventem, in the outskirts of the capital, hence why it is also called Zaventem Airport. The airdrome is the city’s international and busiest airport and is the home base of Brussels Airlines.

The construction of the airport began in 1940, during World War II, when the country was occupied by German troops. It currently serves 23 million passengers every year.

Brussels Airport has been chosen on various occasions as the best airport in Europe, most recently in 2005.

Getting to the city centre from Brussels Airport

Compared to Charleroi Airport, Zaventem Airport is extremely well connected with the city centre and other cities in Belgium.

If you book a private airport transfer service, the chauffeur will be waiting for you at the arrival terminal with a sign with your name on it. This is the fastest and most comfortable way of getting to your hotel, especially if you don’t speak French or Dutch. You can book a four-passenger car for just € 45 (US$ 47.30) or an eight-seater for € 65 (US$ 68.30).

The airport train is a fast and inexpensive way to get to Brussels’ city centre. All trains connect Brussels Airport to Brussels North, Brussels Central and Brussels Midi railway stations. On weekdays a one-way journey costs € 8.60 (US$ 9) and on weekends it costs € 14.80 (US$ 15.60) and takes approximately 20 minutes to get to the centre. The airport train station is located below the terminal (basement level -1).

Bus, great if you are going to the European Quarter

The bus company De Lijn connects the airport with the city centre and the STIB connects Zaventem with the European Quarter of Brussels. It takes between 30 and 40 minutes and it is probably the easiest way to get to your hotel if you’ve found accommodation in this area or meeting if you are travelling to Brussels on business.

A taxis from Brussels Airport to the city centre is around € 45 (US$ 47.30); therefore, more expensive than a private airport transfer service.

If you are not staying in Brussels, you will find trains or buses to Ghent, Bruges, Antwerp and Leuven. 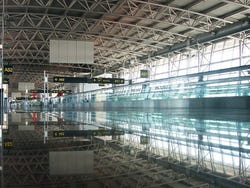 Charleroi Airport Where to Eat