Mini Europe, a miniature park in the outskirts of Brussels, was opened in 1989. It has over 350 miniatures at a scale of 1:25 that represent the most important landmarks from approximately 80 cities from countries in the European Union.

Located next to the Atomium, Mini Europe is a quick and enjoyable was of discovering the EU’s most important monuments, for example, an Eiffel Tower 13 meters high and the four meters tall Big Ben. The park receives 350,000 visitors that explore the miniatures recognising the various landmarks each year.

Some of the reproductions stand out for being extremely complex, like the Town Hall of Brussels, for which nearly 300 statues were sculpted by hand, or the Santiago de Compostela Cathedral that needed 24.000 hours of work. The most complicated and sophisticated landmarks are also the most expensive, for example, the Grand Place of Brussels cost € 370 (US$ 388.90).

Mini Europe is full of gardens and moving windmills, lorries, trains and boats and even an erupting Mount Vesuvius.

Perfect for all ages

Mini Europe is an ideal place to spend a few hours wandering through its footpaths discovering the miniatures. It is situated very near the Atomium and is, as they say, an original and unusual way of exploring the various countries of the European Union. If you’re travelling with children, Mini Europe is a definite must.

However, if you’ve been to Madurodam in The Hague it’s possible that Mini Europe will be a little disappointing. The reproductions do not have the same quality and it isn’t as well looked after as the Dutch park.

The admissions ticket to Mini Europe includes an English audio guide with facts and figures on all the reproductions and it also indicates the route you should take. 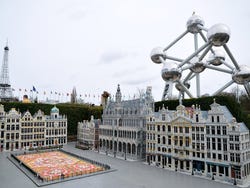 The Grand Place and Atomium in Mini Europe 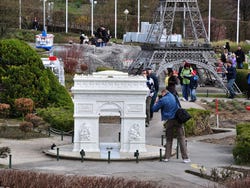 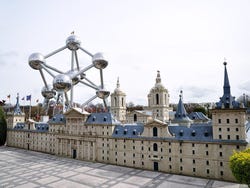 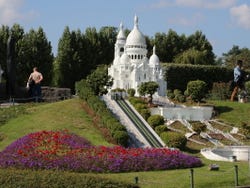 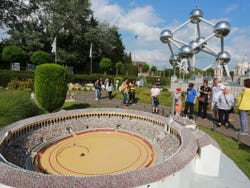