Charleroi Airport has the advantages and disadvantages of all small airports. It is small with very few shops, so there is little to do. However, it is difficult to get lost, doesn’t take much time to get to the gate and the airport security is quick.

This airport is flourishing thanks to popular airline companies like Ryanair. In 2018 more than 8 million passengers passed through its terminals, compared to 6 million in 2011.

Getting to Brussels from Charleroi Airport

There are several ways of getting to Brussels from Charleroi. These are the best options:

If you book a private airport transfer service, the chauffeur will be waiting for you at the arrival terminal with a sign with your name on it. This is the fastest and most comfortable way of getting to your hotel, especially if you don’t speak French or Dutch. You can book a four passenger car for just € 80 (US$ 92.50) or an eight-seater for € 95 (US$ 109.90). Both options are cheaper than getting a taxi.

The company Flibco has a shuttle bus service that connects Charleroi Airport and Brussels, leaving the airport every 30 minutes. The journey takes one hour and the bus stops in Bruxelles-Midi (Brussels-South railway station, in rue de France).

Once you get to Bruxelles-Midi you can take the metro, the tram or a train to the other stations in the city.

If you take the shuttle bus back to Charleroi Airport, we suggest arriving at least 15 minutes before the departure of the bus as there is normally a queue and buses fill quickly.

If you are not staying in Brussels, but in another Belgian city you might prefer to take the bus (line A) to Charleroi train station and from there take a train to your destination.

A one-way journey costs € 3 (US$ 3.50) and it takes 20 minutes to get to the railway station. Another option is to buy a “bulk” ticket that includes the Bus Line A and the train ticket to your destination.

You will find that most taxi companies advertise that a taxi from Charleroi Airport to Brussels city centre costs approximately € 80 (US$ 92.50) - € 90 (US$ 104.10). However, it will normally cost you over 100€, especially on your way from Brussels to Charleroi. 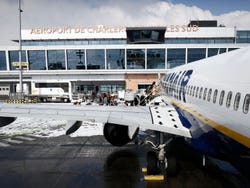 Getting to Brussels Brussels Airport