Besides clothes shopping, Belgium also has a number of traditional products which are well known worldwide.

Brussels is not just famous for its beer and chocolate, here is a list with the best local souvenirs:

Produced in Belgium since the seventeenth century, Belgian chocolate has become one of the country’s most important economic and cultural products. This confection is most easily found in the city's historic centre, where there is a large selection of chocolate shops.

The largest manufacturers are Godiva (most expensive), Galler, Neuhaus and Leonidas (least expensive).

Besides these famous chocolate companies, there are numerous “chocolatiers” in the city.

Both in Belgian supermarkets and specialised stores, visitors will be able to buy from “normal” beers to beer gift baskets that normally include a lager glass.

If Tokyo is the manga capital, Brussels is the traditional comic strip one. In addition to the specialised shops in Belgium’s capital, you can purchase comic strip books and figurines of your favourite cartoons in the Belgian Comic Strip Center.

If you visit Antwerp and would like to get something a little out of the ordinary, why not explore the city’s jewellery stores, famous for its diamonds.

The shopping areas are rather limited in Brussels, although you can find shops scattered everywhere in the city centre. The biggest problem you’ll have is trying to adapt your visit to its opening hours.

The most exclusive stores and boutiques in Brussels are found on Avenue Louise and the surrounding area.

The majority of the shops are located between the metro station and a wooded area of the street. This part isn’t very pretty, although it has several Art Nouveau buildings, like the Solvay Hotel.

This pedestrian street is the most popular shopping street in Brussels with international fashion brands like Zara, Mango and Esprit. It has two large department stores: Inno and City 2.

Compared to Avenue Louise, you'll enjoy walking through Rue Neuve and is also located in the city centre.

Most of the side streets that lead to the Grand Place are packed with “chocolatiers”. However, in the Rue du Marché aux Herbes and its adjoining streets you’ll find fashion boutiques to cater for all tastes and budgets (especially for those with a larger budget).

If you take the street Heuvelstraat from the Grand Place, you’ll get to the most beautiful glazed shopping arcade in Europe, the Galeries Royales Saint-Hubert.

You’ll find in the Place du Jeu de Balle the Marolles Market that has numerous stands with original objects and antiques, we recommend going early on the weekend. This is a great place if what you want is to find original presents or decorative objects, otherwise it’s not worth your while. 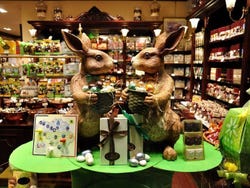 Chocolate shop in the Saint-Hubert Galleries 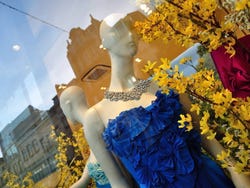 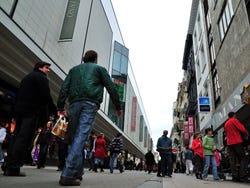