The Parc de Bruxelles (Brussels Park) is also known as the Royal Park. It is the largest urban park in the center of Brussels: not comparable in size to Hyde Park in London nor Central Park in New York, but it is where many Belgians and foreigners go to relax and go for a stroll.

During the Middle Ages, the Dukes of Brabant used this land as hunting grounds until 1770 when the area was renovated and transformed into a park full of sculptures, fountains and footpaths.

The Brussels Park is bounded by the Royal Palace (on the south side), the rue Ducale, the Belgian Federal Parliament and rue Royale. Very close to the park visitors will also find the Musical Instruments Museum and the Royal Museums of Fine Arts of Belgium and the church of St-Jacques-sur-Coudenberg.

In the afternoons and during the weekend, the park comes to life and visitors will see families and groups of young people talking, sitting on the many benches, doing sport, or drinking a beer, how very Belgian! 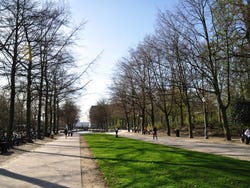 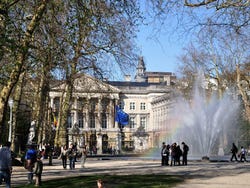 Next to the Royal Palace