It is cold in Brussels from approximately late October to early March, with average highs between 39°F (4°C) and 44.6°F (7°C). The beginning of autumn is generally grey, but the temperatures are mild. In late spring the temperature can suddenly rise and it can sometimes be hotter than in summer.

In December, January and February, the days are a lot shorter and the temperatures drop to 30°F (-0°C), especially during the night.

Rain is very frequent in this region with approximately 200 days of rain per year in the capital, so keep in mind that even if you go during summer you will have to bring an umbrella.

Since Brussels has a mild oceanic climate visitors can visit the city all year round (with the correct clothing). However, we recommend travelling to the city between May and September, since the temperatures are normally warmer and thus more enjoyable.

If you don’t mind the cold, winter can be an interesting time to visit the capital of Belgium. Not only will you probably save on plane tickets, but you will get to see Brussels lit up for Christmas. Moreover, Brussels has a certain melancholic charm when it rains, making winter an attractive season for tourists. 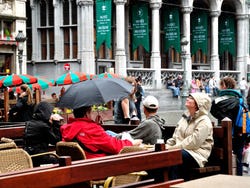