These are some of the traditional Belgian dishes:

Belgium has the world’s leading brewer and over 180 breweries in the country, making this alcoholic beverage world famous. It's the most popular drink in the country with Belgians drinking nearly 100 liters of beer each year. Some of the most renowned beers include Stella Artois, Leffe, Chimay, and Duval.

In most bars, you’ll be given a plate of chips or nuts with a glass of beer, but you can also order a cheese board with a bit of mustard and spices.

If you're a beer lover, the best way of getting to know is by taking a tour, which you can reserve ahead of time on our website:

One of the best-known desserts from Belgium is Belgian waffles (called Gaufres in French). There are two varieties, the ones from Liège are smaller and crunchier and the ones from Brussels are much larger and thicker. You can normally choose from a selection of toppings like chocolate, whipped cream, etc.

Since the nineteenth century, the chocolate industry has been extremely important in Belgium and is now, like Switzerland, renowned worldwide and is one of Europe’s most important producers.

The most famous type of chocolate in Brussels is praline. It's a crunchy shell filled with chocolate, which became popular in the 20th century and has become a star product in Belgium.

If you're a fan of this treat, you can either buy a box of chocolates from specific shops like Leonidas, Neuhaus, or Godiva, or if you prefer to buy some in a supermarket we recommend Côte d’Or, the largest commercial brand in Belgium.

If you have a sweet tooth, the following tours in Brussels are sure to take your fancy!

Chips, fries, or French fries are originally from Belgium and play an important role in the country’s traditional dishes. Moreover, Brussels and other Belgian cities are packed with “frites” stalls where you can buy a large portion of fries with a sauce or two on the side. You can’t leave Brussels without having tried the best “frites” in the world, so why not have some for an afternoon snack or after a long night out? - Most stalls are open until late.

Restaurants in Brussels are fully adapted to the needs of tourists and you’ll find most bistros open until approximately midnight, especially in the city center.

Although Brussels is in general quite expensive, eating out can be relatively cheap, spending as little as € 3 (US$ 3.20) for a large sandwich (which is prepared on the spot), to visiting some of the best Belgian restaurants where it'll cost approximately € 60 (US$ 64.30) per person.

Best areas to grab a bite

The city center of Brussels is full of restaurants, but one of the most popular areas is the Grand Place and the Rue des Bouchers. Even though these two areas are very touristy, they offer a wide selection.

Around the Grand Place, restaurants tend to be more expensive, while in the Rue des Bouchers, you’ll find restaurants to cater for all, including a 3-course meal with a drink for € 12 (US$ 12.90). 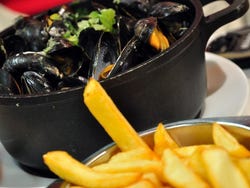 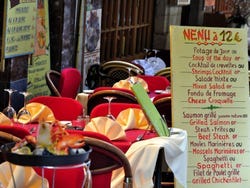 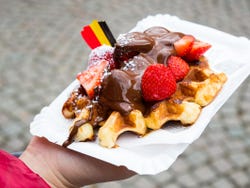 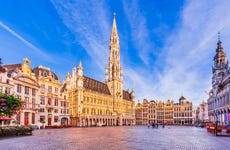